The new Mars rover that is being developed for launch in 2020 by the National Aeronautics and Space Administration (NASA) will include a micro-X-ray fluorescence (micro-XRF) instrument called “PIXL,” which stands for “Planetary Instrument for X-ray Lithochemistry.” PIXL will be mounted at the end of the rover’s robotic arm and is designed to provide fine-scale identification of the elemental composition of rocks and soils on Mars. It is one of seven instruments on the Mars 2020 rover to seek evidence of past life on Mars. Abigail Allwood, the principal investigator for PIXL at NASA’s Jet Propulsion Laboratory, in Pasadena, California, spoke to us about the development of the instrument and how it will be used.

In the suite of instruments that is being used to explore Mars on this and previous missions, what will the specific contribution of micro-XRF be? In other words, what information will this technique provide that others don’t?

PIXL will contribute several things to Mars 2020 mission. PIXL will examine the abundance and distribution of chemical elements at sub-millimeter scales in rocks and soils. PIXL uses micro-XRF spectroscopy and a camera–optical fiducial system to correlate chemistry with fine-scale visible textures. PIXL can measure the composition of individual grains, cements, concretions, veins, layers and crystals. PIXL builds on previous rover-based measurements of chemistry performed by the alpha-particle X-ray spectrometer (APXS) that was deployed on the Mars Science Laboratory and Mars Exploration Rover missions, by providing increased spatial resolution and sensitivity.

Essentially, PIXL is a petrology investigation—an integrated study of rock composition and texture and microstructure. The measurements performed by PIXL will enable very detailed insights to the processes of rock formation and alteration, which is important for understanding past habitability and the potential for biosignature preservation.

PIXL fits well with the other surface geology instruments aboard the 2020 rover: SHERLOC, an arm-mounted close-up survey of organics and minerals using UV fluorescence and Raman; Supercam, a mast-mounted remote survey of elements and minerals using infrared spectroscopy, laser-induced breakdown spectroscopy, and Raman spectroscopy; and the Mastcam-Z, which is a mast-mounted camera. We are very excited about the capabilities of the whole instrument suite. We will be able to access a whole new level of detail about Mars geology and astrobiology.

What are the biosignatures that you are looking for with PIXL—that might indicate that life once was present on Mars?

PIXL will play different roles depending on the type of biosignature in question. In terms of outright detection, PIXL is best suited for chemical biosignatures—a broad term applied to any kind of elemental pattern or feature that may originate from microbial metabolism. An example is vanadium-enriched “reduction spots”—tiny dark spots in the reduced zone of red beds, where local enrichments in vanadium and other biologically interesting elements are thought to reflect biologic processing.

PIXL will also enable interpretation of geology to guide the rover to promising locales for biosignatures. It will then document the geochemical characteristics of any other kinds of potential biosignatures that are detected (for example, by measuring the chemical composition of layers in a stromatolite), or measure the geochemistry or texture of organic deposits. Lastly, it will establish geologic context to help with interpretation of potential biosignatures discovered on Mars or in samples that are returned to Earth. 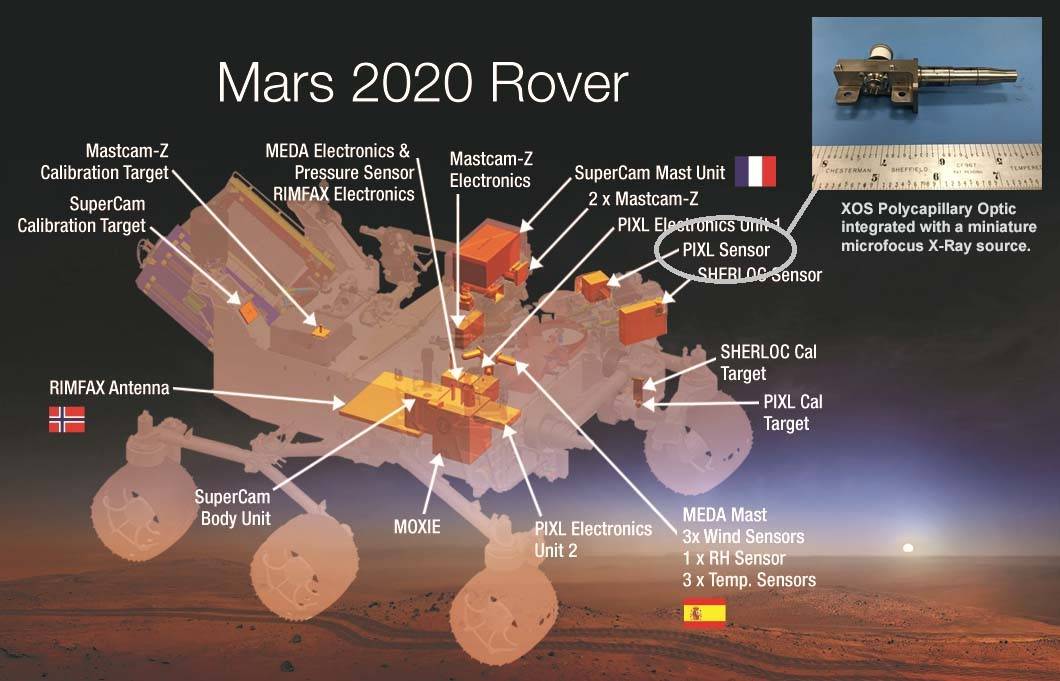 PIXL can measure major and minor elements in around 5–20 seconds. Trace-element detection (tens to hundreds of parts per million) takes a few minutes to around 30 minutes.

The other way is through autonomous recognition of different rock components to trigger long dwells. This is known as adaptive sampling. This approach uses an onboard algorithm to monitor spectra in real time and recognize when certain spectral thresholds are exceeded. The thresholds are established to enable recognition of when PIXL scans across a transition from one part of the rock into another, compositionally distinct part of the rock (such as pyroxene grains into sulfate grains).

Can you explain a bit more about how adaptive sampling (1) improves sampling?

Adaptive sampling improves our analysis of a given rock target by ensuring we have at least one long dwell (such as 2 minutes instead of the baseline 10 seconds) on every recognizably different component of the rock. The long dwell gives us increased sensitivity to the trace element composition of that rock component. If we wanted to get 2-minute dwells otherwise, we would have to do it on every spot, which would expand the total measurement time to unacceptably long durations.

When the instrument is on Mars, how will sampling locations be determined?

On the basis of our interpretation of the geology we have observed so far, with all rover instruments and orbital instrument data.

PIXL also incorporates a high-resolution camera. How important is the camera capability in terms of interpreting the XRF data? How will the XRF spectra and the camera images be used together?

The camera is critical for tying the measured chemistry to fine-scale texture and microstructure. Knowing which part of the rock (such as grain vs. cement or matrix vs. vein) a chemical composition relates to is essential for understanding the origin and significance of that measured composition.

We will correlate the chemistry with the images by projecting a pattern of light beams onto the rock surface. The light pattern has a known geometric relationship to the X-ray beam, so we can determine the location of the X-ray beam very precisely on rough or flat surfaces, even though the beam is not visible.

What are challenges involved in making this instrument robust enough for use on Mars?

One of the biggest technical challenges is the high-voltage power supply for the X-ray tube. We have to generate 28 kV on the end of the rover arm in the ambient Martian environment, which has about the worst pressure for electrical breakdown. We have some of the best people in the business working on it.

What kind of collaboration have you had with commercial instrument manufacturers in the development of this instrument or its parts?

We have two key industry partners who have been working with us since PIXL’s inception in 2010. Moxtek is building the X-ray tube—a tiny, very low power, side-window design developed for PIXL. It’s similar to their commercial miniature tubes but was developed by Todd Parker to meet our specific needs. XOS is providing a custom polycapillary X-ray focusing optic optimized for integration with the Moxtek tube. I believe that it may be the first time a polycapillary X-ray optic has been integrated with a miniature low power X-ray tube for a “portable” instrument application. Both partners have been outstanding to work with, and their support has been very important to the project’s success.

Abigail Allwood is an astrobiologist at NASA’s Jet Propulsion Laboratory in Pasadena, California. She is the Principal Investigator of PIXL (Planetary Instrument for X-ray Lithochemistry) on the Mars 2020 Rover mission, as well as a research scientist specializing in ancient microbial biosignatures. She studies the earliest evidence of life on Earth and the environments that nurtured primitive biota, through field investigations and multidisciplinary analyses of field samples in the laboratory. Combining her expertise in sedimentary geology and paleobiology, Allwood’s research on Paleoarchean stromatolites (microbial sedimentary structures) in Western Australia provided convincing evidence of life’s antiquity, showing that microbial life existed on the Earth 3.45 billion years ago and formed a reef-like structure in shallow marine environments.

At JPL, Allwood has turned her attention beyond Earth, applying lessons learned from terrestrial paleobiology to the search for evidence of ancient life on Mars. Seeing the utility of micro-focused-X-ray fluorescence spectroscopy (micro-XRF) for the analysis of her terrestrial field samples, she developed a micro-XRF instrument for planetary rover missions. That instrument – PIXL – is now part of the science payload selected to fly to Mars in 2020, where it will be used to analyze rocks and soils encountered by the rover, and seek potential evidence of life on Mars.