An international consortium has built the world's fastest soft X-ray camera. Tailor-made for the X-ray laser European XFEL, the DSSC detector shoots 800 images in just under 200 millionths of a second and can detect single X-ray photons. With its incredible speed, the detector can keep up with the rapid pace of X-ray flashes of the European XFEL that researchers use to analyse a wide variety of material samples with atomic accuracy. 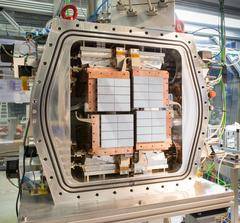 Download [2.7 MB, 2115 x 1971]
The DSSC detector has 32 sensors with 256x128 pixels each. Credit: DESY, Karsten Hansen
The European XFEL delivers 27,000 X-ray flashes per second. They come in ten packets, called pulse trains, with 2700 flashes each. Within the pulse trains, the flashes repeat every 220 nanoseconds (billionths of a second). Detectors that shoot images at this speed are not available off-the-shelf. Ten years ago, therefore, international institutions joined forces to develop a tailor-made X-ray camera. Partners in the consortium are the University of Heidelberg, the Politecnico di Milano, the University of Bergamo, European XFEL and DESY, where central electronic components and the detector housing have been developed.

The camera's rapid imaging is only possible because the images are buffered directly in each individual pixel before they are read out. “Digital buffering could only be achieved by integrating an analog-to-digital converter in each pixel, which we developed specifically for this X-ray camera,” explained Karsten Hansen, Head of Microelectronics Development at DESY. In this way, the detector can capture 800 X-ray images in each pulse train. This is currently a world record and amounts to around half a terabyte of data per minute, equivalent to about 100 DVDs.

After ten years of development and construction, the DSSC detector was recently successfully put into operation. “This is a fantastic achievement in terms of detector development and opens up unique possibilities for the photon science community,” emphasised project and consortium leader Matteo Porro of European XFEL. “With the DSSC we have shown that it is possible to count single photons in the soft X-ray regime at the very high pulse repetition rate provided by the European XFEL.” 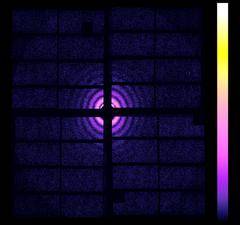 Single shot diffraction image of pinholes with soft X-ray photons, acquired by the DSSC detector during commissioning at the SCS instrument. Credit: European XFEL
Apart from the analog-to-digital converters, DESY has developed almost all electronic components of the camera head that had to be particularly compact. The camera head was assembled in the DESY microelectronics laboratory before being integrated with the other components in the housing developed by the DESY detector group. “After years of design and development, it was great to see the individual detector components being assembled together at European XFEL during this past year,” said Markus Kuster, Detector Group leader at European XFEL.

The six measuring stations, or instruments, at the European XFEL are specialized in different analyses and use X-ray flashes with different properties. The DSSC (DePFET Sensor with Signal Compression) detector was developed for the SCS (Spectroscopy and Coherent Scattering) instrument, where the electronic and atomic structure of functional and complex materials can be explored with so-called soft X-rays that are characterised by a comparable long wavelength. In initial experiments, researchers at the SCS measuring station used the DSSC detector to investigate ultrafast magnetic processes.

European XFEL is a joint venture of twelve European partners. DESY developed and built the particle accelerator which drives the X-ray laser and which is operated from the DESY accelerator control centre. DESY is also the main shareholder European XFEL.

This reproduced from desy.