About us  Greateyes was founded in year 2007 as a spin-off from Humboldt-University Berlin and then quickly developed to an international acting company. Today it has strong customers i

Greateyes was founded in year 2008 as a spin-off from Humboldt-University Berlin and then quickly developed to an international acting company. Today it has strong customers in research and industry from many different countries.

Greateyes develops, manufactures and markets high-performance scientific cameras. They are used as precise detectors in a wide range of imaging and spectroscopy applications. Furthermore the company manufactures electroluminescence and photoluminescence inspection systems for the solar industry.

The scientific superresolution cameras from greateyes form a completely new class of scientifc cameras for high performance spectroscopy and imaging from the near-infrared to X-ray region. At its heart, the latest technology advancement provides true subpixel resolution of the detector, and thus offering increased spatial or spectral resolution in comparison to the standard scientific cameras.

Greateyes scientific cameras are known for their ultra low readout noise, exceptional high quantum efficiencies, low dark currents by deep sensor cooling and highest dynamic range. The latter requires a large pixel size with an associated high full well capacity. As a consequence, the spatial resolution of the standard scientific camras is limited. The novel greateyes camera class integrates the superresolution technique to achieve effective subpixel resolution. For this purpose, several images are aquired, each with the detector shifted stepwise in the subpixel micrometer range. From the set of individual frames an image with higher resolution is generated. The entire measurement sequence is fully automated.

The innovative technology is available for all greateyes camera series. This paper provides insight in the technology, its capabilities and applications. Please see individual data sheets for each camera series for ordering details. The upper left image shows the principal structure of the imaged reference pattern (1951 USAF resolution test chart) consisting of groups of three bars. Images 1-3 compare the standard single image aquired by the camera and the superresolution image obtained from a set of 4×4 individual frames with the sensor being automatically shifted to defined subpixel positions. For reference, an interpolated image is shown as well. The superresolution image has a significantly higher information content compared to both the original image and the interpolated image. The true subpixel resolution performance is also clearly seen in the intensity line profiles. The white line in the images 1-3 indicates the intersection selected for the intensity profiles.

The achievable subpixel detector resolution has been determined to be a factor of 1.6 better than the sensor pixel size for each direction (x,y) but optimal experimental layout may yield even better results. The table on the left page lists the available standard scientific cameras and the typical gain in image size and effective subpixel resolution for the superresolution camera variants. 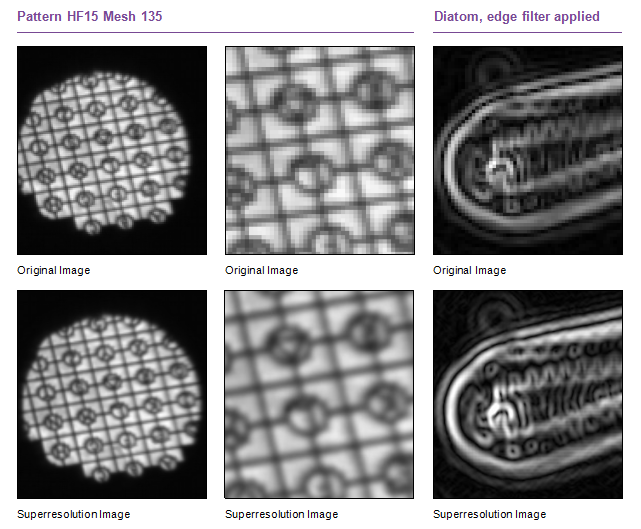 Low light imaging with improved, subpixel resolution in the range from NIR to X-ray